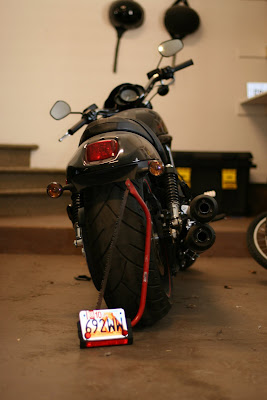 I should have posted this before I went to the Philippines (thanks Jane for the pic). This is what I came home to the day before I left- Rubber part of fender with license plate laying on the ground, saw laying next to it (although it was a hack saw, not this saw). I was horrified of course and immediately looked for Myla or KJ (the only two with devious enough minds to come up with this- my angel Kiana actually has a conscience, and Sela is too young of course… I’m sure she’ll get into a fair amount of trouble… refer to toilet picture in a prevous post). I found KJ playing his XBox (I know, strange). Anyway, here is the conversation that took place:

Dad: KJ! Do you know anything about my license plate being cut off my motorcycle?

Dad: KJ did you cut it off?

KJ: (Candid as only a kid can be) After I finished doing it.

Dad: (holding back a smile) KJ, next time you MUST think before you do it that you shouldn’t do it… so you don’t do it.

Dad: Ok, now give me knuckles… that was pretty funny. BUT DON’T DO ANYTHING LIKE THAT AGAIN!